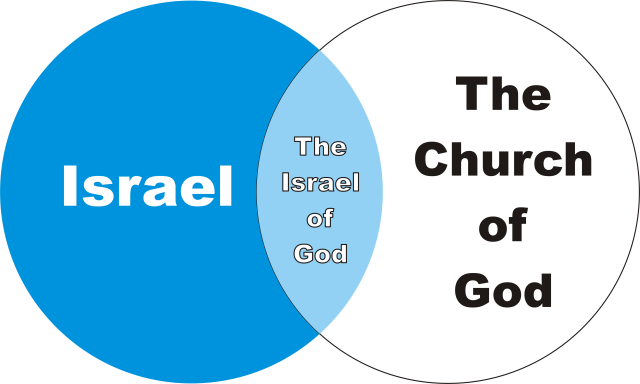 The Israel of God = God’s faithful people within Israel

If you have been following this series, you will have seen that in part 3 I received the interpretational equivalent of a bloodied nose.

As a quick reminder, we had taken a look at Romans 2:28-29 and Romans 9:6. Previously, I had naïvely assumed that these verses proved that Christians are ‘true’ or ‘spiritual’ Jews, and that the Church is ‘true’ Israel. However, just a quick look at these texts soon revealed that Gentiles are entirely absent from the contexts of both passages. This meant that they provide precisely zero proof for the assertions I had been making about them. I was embarrassed to discover that I had been guilty of one of the cardinal sins of interpretation, namely eisegesis – taking something that was completely absent from the text (i.e., Gentiles), and interpreting it as if it was present.

Well, the dust has settled and I have now recovered from my bloodied nose… hopefully having learned my lesson! Romans 2:28-29 and Romans 9:6 might not support my replacement theology, but our next text contains what is probably the most popular verse that is used to prove replacement theology. After this article I’m sure I will be back in the game!

Galatians 6:15-16 ‘Neither circumcision nor uncircumcision means anything; what counts is the new creation. 16 Peace and mercy to all who follow this rule – to the Israel of God.’ (NIV)

The apostle Paul is writing this letter to a Christian church. He has told them that nothing needs adding to the simple gospel of salvation by grace through faith. Salvation is not achieved by grace through faith PLUS something else – in this case circumcision. Paul pronounces ‘peace and mercy to all who follow this rule’, and these Christians that do so he then calls ‘the Israel of God’.

Here I rest my case. If there was ever rock-solid evidence to support replacement theology then surely we have it here in Galatians 6:16? Like I said, I’m back in the game!

Before I start on my victory lap though, I must confess that something is bugging me. Given the rock-solid evidence we have just seen in Galatians 6:16, why doesn’t everyone believe in replacement theology?

Being aware of other perspectives

Part of aiming to one day be a good interpreter is to understand exactly why other people come to different conclusions to our own. So what other possible way is there to see Galatians 6:16?

It does not take much digging before discovering what the key issue is. It is a little three letter Greek word, kai. So what is the issue? Well, kai can be understood in more than one way.

The first sense in which to understand kai is as the word ‘even’. This would make the object following the ‘even’ the same as the object mentioned before the ‘even’. So Galatians 6:16 would translate as ‘Peace and mercy to all who follow this rule, EVEN to the Israel of God.’

This is the sense of the word kai adopted by the NIV, which I quoted from earlier.

So, in what other sense can kai be understood? Well, it can also be translated as ‘and’ (or very occasionally ‘also’), which would carry the sense of distinguishing between two different objects. So Galatians 6:16 would translate as ‘Peace and mercy to all who follow this rule, AND to the Israel of God.’

This would make ‘those who follow this rule’, and ‘the Israel of God’, two different entities. If this is correct then this verse does not support replacement theology. Ahh, I am beginning to see the potential problem!

Which translation of kai is correct?

So how do we decide which way to translate our kai? The first thing to check is how kai is usually translated in the rest of the New Testament. When we do this it turns out that kai is almost overwhelmingly translated as ‘and’, and very rarely as ‘even’. Hmm, this isn’t looking good…

What about the context and argument of the epistle?

As we saw earlier, the apostle Paul is writing to a Christian church. Significantly it is a church consisting of Gentile, not Jewish, believers. Paul is telling them they do not need to be circumcised in order to become the people of God. In other words, they do not need to become Jewish to become the children of God. Ethnicity is no barrier to becoming God’s people, just as gender and social status do not determine whether we can receive salvation (cf. Galatians 3:26-29). The only requirement is faith.

Not only are Gentiles not required to become Jews, but nowhere does the text say that when they believe they become ‘spiritual Jews’. In fact, such a position would essentially counter Paul’s teaching that Gentiles do not need to become Jews in order to be saved. Verse 15 tells us that, ‘Neither circumcision nor uncircumcision means anything; what counts is the new creation’. In other words, as far as individual salvation is concerned, it does not matter whether you are a Jew (circumcised) or a Gentile (uncircumcised); what matters is that you are part of God’s ‘new creation’. Salvation brings us into something entirely fresh and new – the new creation. Jews can be part of God’s people in that new creation, and Gentiles can be part of God’s people in that new creation.

It looks like I have my answer concerning how to correctly translate kai. The weight of evidence is overwhelmingly behind kai meaning ‘and’. Paul was referring to two different groups of people.

We can conclude from this that the translators of the NIV have been rather naughty in their rendering of Galatians 6:16. They have gone beyond simply translating the verse, and have instead actually interpreted it according to an outside theological position, rather than exegeting the text in its context. The NIV wrongly leaves out the kai (the ‘and’), giving the false impression that there is only one group of people in view. The CSB sadly does something similar. Thankfully, other versions of the Bible, such as the KJV and NASB translate this verse accurately, without imposing an outside theological bias.

As we saw earlier in this series, we must not base our exegesis, our interpretation, on our pre-supposed theology. That is the exact reverse of sound interpretation! We should not pre-suppose our theology and read it into the text in this way. Instead, good practice is to try to put our systematic theologies aside as we exegete the text, and THEN build our theology on the results of that exegesis.

Exegesis does not bow to theology – theology must bow to sound exegesis.

We could paraphrase Galatians 6:15-16 as – ‘Neither being a Jew nor being a Gentile has anything to do with salvation. In contrast, what does count is being part of the new creation. I, Paul, pronounce peace and mercy on you Gentile believers [the recipients of this letter] who follow this rule, who do not think that salvation means becoming a Jew. In addition, I also pronounce peace and mercy on non-Gentile believers, i.e., Jewish people, who follow this rule. This second group of Jewish believers are the Israel of God’.

Approaching from the wrong perspective

It looks like for now I will have to forget about my plans for a victory lap… but you know what? That is ok. No-one can be right about everything, and everyone is wrong about something.

Our investigation of Galatians 6:15-16 has certainly been interesting. The results show why the first notable replacement theologian of the Church, Justin Martyr, never appealed to these verses in order to support his view. Also, when you think about it, if Paul had meant to use the expression ‘the Israel of God’ to redefine Israel as including Gentiles, it is rather strange he introduced it at the close of his letter rather than within the main teaching section. Also, in hindsight, if ‘the Israel of God’ redefines Israel in such a way, it is odd that Paul did not use the phrase in his principle teaching on the role of Israel in Romans 9-11.

In this article, and the previous one, I have looked at the exegetical evidence for replacement theology by examining the three strongest texts usually offered to promote it. In each case I have found that after a closer examination, none of them support replacement theology.

I have not totally given up the hope of finding such support, so will continue my search in our next article…