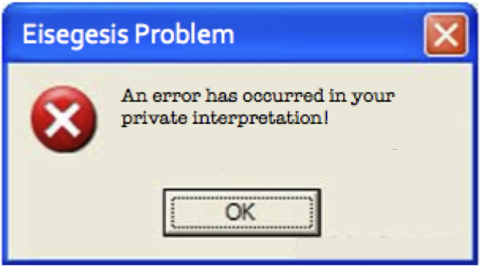 In part 2 of this series, we saw how there are quite a few verses in the New Testament that we can use to support replacement theology. I briefly mentioned Romans 2:28-29, Romans 9:6, Galatians 6:15-16, Acts 1:6-8, and Matthew 21:43. I should also say that I could have chosen more passages as there is plenty of evidence, but I decided to limit it to the strongest candidates. After all, with so much evidence it was basically an open-and-shut case in favour of replacement theology (also called supersessionism/fulfilment theology).

However, by the end of the article I had to hold my hand up and admit that I had in reality only made a series of assertions, without actually attempting to prove what I was saying. This is the sign of a poor interpreter. Speaking for myself, being a poor interpreter is something I very much want to avoid, and I would hope everyone reading this article would say the same.

Yet embarrassingly I had to admit I had not even done the simplest step of good interpretation – I had not taken any time to look at the context of the verses in question. Truth be told, I was assuming my position. I had probably been relying on what I had heard other Bible teachers and preachers had said or written. I had to remind myself that truth is not a majority decision, so it really is irrelevant what the majority of church ministers happen to believe.

A Jew who is one inwardly

So let’s take a closer look at these verses.

Instead of simply making the assertion, let us do what good interpreters should do, and ask some questions of the text.

The first step is to just clarify what I was doing with the term ‘Jew’? The answer is, I was expanding or widening its meaning to include believing Gentiles. This step was necessary in order to justify applying the term ‘Jew’ to all Christians, because most Christians are Gentiles. But was I right to do this? Are Gentiles in view here?

We can find out the answer to this question by looking to see if it is consistent with the context.

Paul explains that their external keeping of the law as Jews is not what makes them right with God. As breakers of God’s law, their physical circumcision has no value. Instead, God desires circumcision of their hearts, making them inwardly Jews, and not simply Jews outwardly by virtue of their ethnicity. This was always God’s desire for the Jewish people, as stated in Deuteronomy 30:6.

This means that Gentiles are completely absent from the context. So when I was including Gentiles in Romans 2:28-29, I was actually taking something from outside the text, and importing it into the text. This is called eisegesis, and is a BIG no-no when it comes to sound interpretation. It totally spoils the interpretation, forcing the text to say something it is not actually saying.

What is the alternative to expanding/widening?

So if Paul is not expanding the term ‘Jew’ to include eisegetically imported Gentiles from outside the text, what is Paul saying in Romans 2:28-29? The alternative interpretation, and one that does not commit the offence of eisegesis, is that Paul is narrowing its meaning to a remnant of Jewish believers within the wider ethnic Jewish nation. Not only is this consistent with the immediate context, it is also consistent with the concept of a believing Jewish remnant within the nation that we can see throughout the wider context of both the Old Testament and the New Testament.

I remember once hearing a teacher quote Galatians 3:28 ‘there is neither Jew nor Greek, neither slave nor free, nor is there male and female, for you are all one in Christ Jesus’ (NIV). In this verse, Paul is saying there is no ethnic, social or gender barrier to being a child of God, and heir of His promises. Yet not seeming to grasp this, with his very next breath this teacher said there is no Jew or Greek, but in fact all Christians are Jews, spiritual Jews. In saying this he was directly contradicting and misunderstanding Galatians 3:28. He had based his reasoning on the erroneous ‘expanded’ interpretation of Romans 2:28-29, an interpretation based on eisegesis.

This is the nature of error. Poor interpretation leads to an error, but it does not just stop with that error. Unfortunately it spreads, and gives birth to yet more error. This is then passed on to all who listen to the ‘teacher’, naively believing that the teacher is interpreting the text correctly. This example really illustrates the need for those who would be Bible teachers or preachers to be properly trained in hermeneutics (the art of interpretation). Leading the flock of God astray is a very serious matter. It is bad fruit, which is why James 3:1 says ‘not many of you should become teachers, my fellow believers, because you know that we who teach will be judged more strictly’ (NIV).

Not all who are of Israel are Israel

What about the second text I used in part 2 to support replacement theology? Romans 9:6 says,

‘It is not as though God’s word had failed. For not all who are descended from Israel are Israel.’ (NIV)

I had assumed this was saying that the Church is ‘spiritual’ or ‘true’ Israel, that Paul was expanding/widening the meaning of Israel to include Gentiles. But is it? I am starting to get worried that I might have made the very same basic mistake I made with Romans 2:28-29!

Let’s follow the same simple interpretational procedure as we did with chapter 2, and look at the context. Again, Paul’s fellow ethnic Israelites are clearly his subject (Romans 9:1-5). Paul explicitly says so. He is addressing the question of whether Israel’s continued rejection of the gospel invalidates God’s promises to them. Paul concludes that it does not, as salvation was never founded upon ethnicity. The context clearly concerns national Israel and only national Israel. Gentiles are not introduced into the discussion until verse 24. This means there is no contextual reason to suspect that Romans 9:6 expands the meaning of Israel to include Gentiles. None.

Unfortunately I’m starting to get that feeling of déjà vu! As with Romans 2:28-29 and the term ‘Jew’, the context is telling us that Paul is clearly narrowing the term ‘Israel’ in Romans 9:6 to refer to a remnant, or sub-category, of believing Jews within the larger category of national Israel – no-one else. When I continue to examine the context I soon see a few verses later in Romans 9:27-28, that Paul quotes from Isaiah 10:22-23 and Hosea 1:10 to bring out the concept of a prophesied remnant within national Israel that will experience salvation. The believing Jewish remnant also explicitly surfaces in places like Romans 11:1-6. This remnant receives the promise, and are the same “true Israel” within ethnic Israel we see in Romans 9:6. It is a remnant or sub-category of Jews within the larger category of national Israel. Gentiles are nowhere to be seen, they are alien to the context.

Curiously, I find that when I read the text in Romans 2 and 9, interpreting ‘Jew’ and ‘Israel’ in this contextually consistent and natural way, it makes perfect sense. This is the case with every single occurrence of the words ‘Jew’ and ‘Israel’ throughout the New Testament. So why do we not do this? The answer is because we want to make it ‘fit’ a theological position that we are presupposing is true. Good interpretation does the exact opposite – it rightly exegetes the scripture first, before then going on to use that exegesis to form a theology.

We have seen that I don’t need to commit the eisegetical sin of importing non-existent Gentiles into the text in order to support a theological position, and that’s wonderful. However, it does leave me with a small dilemma – I have discovered that my original assertion that Christians are inwardly Jews, and that the Israel is now the Church, does not have an exegetical leg to stand on; at least not from Romans 2:28-29 and Romans 9:6.

I must admit, I’ve learned a lesson here, not to just assume that an assertion is true before properly investigating it. Thankfully I have some more verses to fall back on to support my replacement theology/supersessionism. I will look at the next one in part 4.